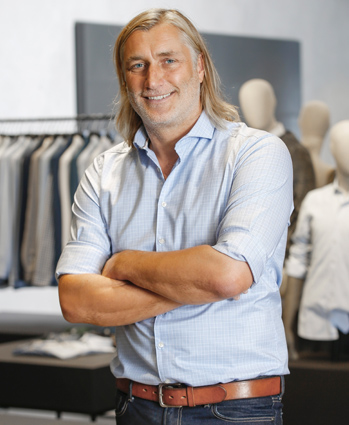 Lasse Holger Mitterhusen was initially appointed on 1 October 2018 as Head of Design for the business segment at OLYMP Bezner KG in Bietigheim-Bissingen (Baden-Württemberg, Germa-ny) with the intention to take over as Creative Director after an extensive period of learning and transition. Georg H. Füth, who has been Creative Director for many years, will continue to work in an advisory capacity for a few months.

Before his appointment at OLYMP Bezner KG, he was responsible as Creative Director for the en-tire product segment at Baldessarini GmbH in Munich and Herford. He has also worked as a lec-turer in the training of young designers and collection developers in the subject areas of men’s design and collection design at the HTW University of Applied Sciences in Berlin and at the AMD Academy of Fashion & Design in Berlin. In October 2018, he joined OLYMP as Head of Design for the business shirt lines OLYMP Luxor, OLYMP Tendenz, OLYMP Level Five and OLYMP No. Six. He was also responsible for OLYMP fashion accessories, including ties, braces, bow ties and pocket squares.

Mark Bezner, owner and CEO of OLYMP Bezner KG, explains: "Creative Director Georg H. Füth has been the creative heart of our company for three decades. With his keen sense for fashion trends and market-oriented collections, he’s not only given the OLYMP brand its fashion style but also helped provide it with an unmistakable collection identity. With Lasse Holger Mitterhusen we’ve found a worthy and competent successor who can fill this key position after a lengthy and intensive period of learning and transition."

Georg H. Füth will support his successor in an advisory capacity before he finally enters a well-deserved retirement towards the end of 2020. The positions of Reinhard Hölscher, who is respon-sible for the entire OLYMP Casual and Smart Business segment of shirts and knitwear, and Michaela Mutka-Wasling, who heads up the independently managed design department for the premium product OLYMP SIGNATURE, will remain unaffected by the appointment of the new Cre-ative Director.